My journey from the south, north.

I am not new to the SCA. I began my journey in AS 41 in the Kingdom of Artemisia. My SCA life began as Onora inghean Chormac, an early fifteenth century Irish lady. Due to many factors, I began to research a persona shift in AS 49 and the transition of persona in AS 50. My research first guided to me to the southwestern shores and regions of India, Tamil Nadu. I found and registered my name. I learned many traditional ways to wrap and wear a sari and quickly learned that the Pacific northwest is not as forgiving a climate for such attire. Not wanting to give up my love for India, I continued researching many of the varied histories, regions and traditions. India is as varied as Europe. The further north I moved, the more comfortable I would feel in the garb. Though my persona is Hindu, I was drawn to the Mughal Empire under to rule of Akbar the Great. The reasons are many, which I can get into at another time. I have landed firmly in the Mughal north, influenced by Hindu, Persian and Mongol culture and heritage. So thus began my journey. My sewing skills are generally all self-taught, having very few lessons. I live 100 miles from the closest fellow SCAdian, rely heavily on trial and error and the wonderful internet. This is my beginning journey into Mughal Indian garb.

Art, how many of us choose our paths

Like many in the SCA, when making a shift in persona I browsed through countless images and pieces of artwork. I happened upon the piece featured above from the Tuti-Nama, a nearly complete manuscript housed in the Cleveland Museum of Art. The Peshwaz that the women are wearing drew me in. I did my research and knew I wanted to recreate this work. Living in a very rural location on the southern coast of An Tir did not provide me with any close to draw as a resource, so again to the technology I went. I joined an unofficial group on the book of faces dedicated to Indian personas. There I found many already Laureled in the Indian arts. Mistress Margavati Bai had created a pattern for the peshwaz, which I used. I asked many questions within the group and made my first peshwaz that I wore to an event in June of AS 53, pictured below. It’s closure is incorrect, it is completely machine sewn and for a first attempt I was happy. 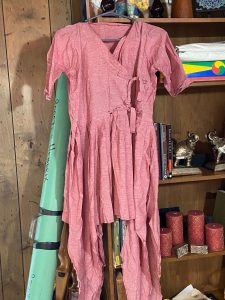 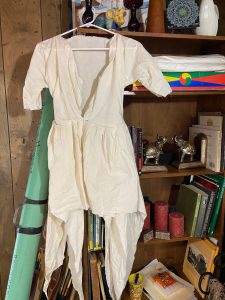 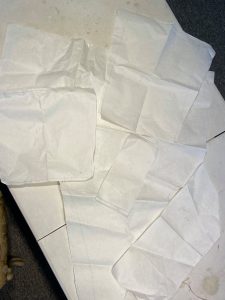 Beyond my first attempts

After wearing my first peshwaz to a couple events and continuing to view art, I realized that I had made a few mistakes with my construction. Women in Mughal Indian wore a center seam down their breasts, where as men wore a cross over tied to one side. Women’s center seam had a multiple ties, and for some it was fashionable to wear this center seam open. The images below are of a close up of ties from different paintings, including my primary inspiration at the top of the page.

With this in mind I began working on my next peshwaz, made of hand-woven silk, purchased online from a shop in India. I planned this to be a much nicer piece and would wear it to a ‘premier’ event, 12th Night. I worked hard on adjusting the pattern to a center seem, created the ties, adjusted the hem and again, machine-sewed this peshwaz. It was complete for An Tir 12th night, AS 53. I also had added many accessories, based on artwork, that had been commercially produced with a few additional touches to appear more period. I am not a person who generally likes to put myself on display, so this and the court costume garb contest I entered sponsored by the Costumer’s Guild are new territory for me. Here are some photos of the finished piece with full ensemble to include silk pants, slippers, a false hair piece with tassels and commercially-produced jewelry.

Not yet satisfied with the look and the journey, I continued to compare each piece of artwork, one to another. There are no complete extant known remaining pieces from this time period. So using the older know pieces, seventeenth century, and the artwork I had access to, I realized that the knife pleats I had chosen to use were all wrong. I removed the skirt to reattach it with a cartridge pleat. In future pieces I will also experiment with a simple gather. My comparison of artwork also showed another key piece I seemed to have missed before. Every peshwaz with the ‘handkerchief’ hem had a short sleeved bodice. Those with a straight hem have long sleeves. Here are a few more pieces as examples.

So, off to the work table I went again. I reattached the skirt, as mentioned and I shortened the sleeves. Here are some photos. I also attempted to ‘stage’ a photo similar to my original inspiration.

I decided that I needed a coat. COVID had left us inside and I felt that this was the next project I needed to complete. I scoured the art and could not find Mughal women wearing coats. They just seemed too pampered in their hareems. So, here is some of my creative anachronism. I took my peshwaz pattern, lengthened and lowered the hem and left the front completely open. I decided to fully line my coat as well. I had purchased both cotton and silk, both look woven from India, and settled on the cotton for its durability. However, I didn’t want my coat to be just a plan solid color (deep eggplant). So, I also learned a little about wood block printing. I purchased by block (online) from, you guessed it, India. It was a large floral motif which I found similar to in many paintings (the floral pattern, not the size). Though, I would not use a large size in the future. Most research led me to find geometric and smaller floral patterns, but I still decided to use this one. I used a commercial wood block paint and method specific to fabric. I created a guide for my pattern and printed 5 meters of cotton fabric, as pictured below.

My inspiration for this coat is actually picture above and here is a close up:

So I am also working on a hat, which I have never done before. Just prior to completing this exhibit, I had not attached ties to my coat for closure and I have not completed the hat. Here are the photos of my coat to this point. Oh and I also made some pants for the first time. They are pictured and also need some refining. Most everything is machine-sewn up till now except the skirts to the bodices. I am currently in graduate school, having just finished my bachelor’s in December. I hope, once I finish schooling, I will have time to learn hand sewing techniques and skills. I have purchased many pieces/parts to also begin to create my own accessories and jewelry. I make most of my own hair pieces from nylon hair and am considering a move to another material. I have pearls waiting to be beaded into headpieces and tassels waiting to be attached to bracelets and armbands. I have also purchased the full translated version of The Tales of the Parrot and intend to be able to recite some of the stories at a point in the future. This manuscript has become the cornerstone of my inspiration. My journey is just beginning and I look forward to sharing it with any interested. Thank you for visiting my exhibit.

In service to the dream,