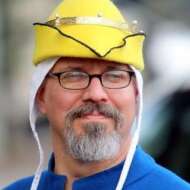 This user has not added any information to their profile yet.

Baron Dunstan M'Lolane is a 13th century noble of Scotland. He is squired to Sir Richard FitzAlan and served with distinction in the Albigensian Crusade. Disillusioned by the massacre at Béziers (22 July 1209), he has sheathed his sword, vowing to only draw it upon command of the Crown, his baroness, or his inspiration, the honourable lady Thalia de Maccuswell. He retired to his small estate in the Scottish lowlands where he has taken up woodworking and poetry under the tutelage of Countess Elisabeth de Rossignol, and service to the Crown under the guidance of Dame Brighid Ross.